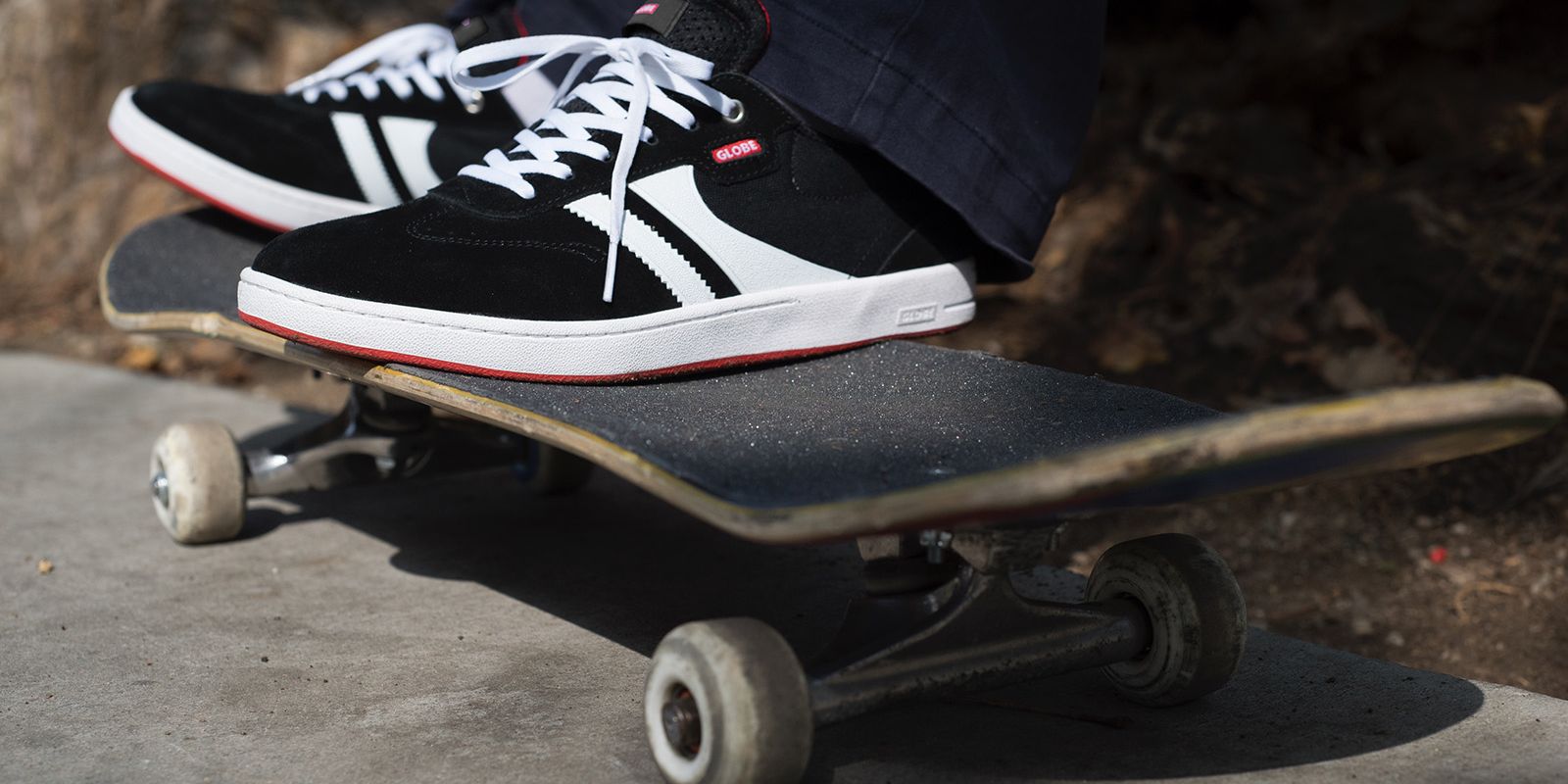 Written by Egor Ivanov on May 6, 2020. Posted in Uncategorized.

Globe is the world-famous Australian brand of shoes and clothes for skaters, surfers and snowboarders, which also produces high-quality skateboard components.

The history of Globe, as a company, dates back to 1994, when in Melbourne, Australia, 3 brothers, professional surfers, decided to do their own thing. Matt, Stephen and Peter Hill initially began to develop their company in the direction of “surf” (well, because they themselves are surfers). 2 years of factory work in the surf industry gave the company nothing but experience. As a result, life made them “jump off” and retrain for the “skate” direction. And quite quickly, Globe became a company that has weight on the world stage of the skateboard industry.

Interesting facts from the history of Globe

The Globe brand has developed very interestingly. The main thing, like any good business, it grew in scale and captured more and more new territories, if I may say so in the language of business.

Already in 1996, Matt Hill and Gary Valentine opened the Globe’s North American Division office in Torrance, California, USA and the Grind Distribution office in France, which was the first Globe shoe distributor in Europe.

Naturally, one of the strategies to increase the recognition of any skate brand is to create a powerful team of riders. Therefore, in 1995, the famous Australian riders Al Boglio, Andrew Currie and Jason Ellis already rode behind Globe.

But the Australian market for Globe was not enough, so in 1997 the first international pro-riders – Chet Thomas and Rodney Mullen began to ride for the brand.

These riders received model skate shoes that were the first to be equipped with an air cushion to increase the cushioning properties of the sole. The unusual riding styles of Rodney and Chet, combined with the use of innovative technology in skate shoes, made the whole world talk about Globe sneakers. All models of Chet Thomas shoes marked CT, which are indicated by Roman numerals as they are born, are iconic. According to one of Chet’s interviews, they are more like really technologically advanced skateboarding shoes than some modern analogs with a narrow profile and vulcanized soles. A thick neoprene toe, a technologically advanced Nitrocel sole with an air cushion, a wide silhouette – this is what should be in a real skate shoe.

If you step back a little from the topic of riders in this part of the article and switch to business, then the interesting fact is that in 1986 the Hill brothers decided to expand and make several more separate projects, which they put together under the same general name Hardcore Enterprises. Under this name, they collected the following brands: Stüssy, Mossimo, and so on – in general, the business expanded and expanded.

Then you have to guess where the Globe began to glow in order to gain even more popularity among riders, since the niche of team skateboarding under the flags of the brand has already been tested. Yes, everything is true – this is the organization, conduct and sponsorship of contests.

In 2000, Globe Shoes became the sponsor of the large, by the standards of those times, contest The skateboarding World Cup, which was held in Dortmund, Germany.

If you are not familiar with the history of this series of contests, then you should watch the following video to understand what the competition was like among the skaters of that time.

And again about the business. We cannot miss this detail from the story about the brand’s history, as these are the key things in the development of the “Globe” in the format in which we see this company now.

In 2000, the business divisions of Hardcore, Die Hard and Globe US were merged into one company – Globe International. And, of course, the company immediately entered the Australian Stock Exchange.

The contest epic Globe World Cup faded, but the company organized one of the coolest contests of the time, codenamed Globe Assault (2006). It is worth noting that this contest was leading to the announcement of significant changes in company policy. Everyone should see the final part of this event for skaters.

In 2010, Globe launched the production of all kinds of staff for skaters: decks, wheels, screws and so on. The design for all this is done in Los Angeles and Melbourne, and the DSM factory in China was engaged in the production.

As of 2019, Globe International sold Dwindle Distribution and related brands, but retained its manufacturing base in China. And this means that buying any Globe products you get a quality product that has been brought to the ideal for many years and continues to improve.

Globe collaborations with other brands

The topic of capsule collections of various brands has always been interesting. Globe could not miss this opportunity and also produced interesting product lines in conjunction with other companies.

Globe has released joint capsule collections with G-Shock more than once. Each launch was in great demand, and now the items of these collections can only be found as rare items at a high price.

Also in this section we want to add information about an interesting project that was created when such riders as Chris Haslam and David Gonzalez joined the team in 2006. The project was called United by Fate. It was a new conceptual approach to the release of skate videos. In the United by Fate format, episodic profiles were released (if you can call them that) that were released only online. In total, the series turned out 6 episodes. All episodes of the United by Fate project are collected in this playlist – https://www.youtube.com/watch?v=RKkHOItDbfo&list=PLtxR_E_ZEQsx9AWlYIu0ATmgio9uOzwsc. Recommended for viewing!

Also in this part of the program we will put a bunch of Globe with Russian-language skateboarding. In our country, there are not many riders who were able to get a model sneaker from a foreign brand. Yura Renov is one of those riders who could get it from Globe. For Jura, a personalized model Encore-2 with cats was made.

In different periods of time, many riders rode for the brand, but as of 2020 they ride for the company (according to the official website eu.globebrand.com/pages/team):

Globe also has its own professional team of surfers and snowboarders.

What are the remarkable Globe shoes now?

If these guys were among the first to decide on the introduction of an air cushion in skate shoes, then what are they ready to surprise their modern customers with? We are telling.

Naturally, the new Globe delivery is a kind of comeback in the 2000s, but the re-released cult models received many interesting technological chips that not only make your skateboarding more convenient, but also keep your legs safe and sound. Each model of Globe shoes has its own “chips”, but in some ways they are similar.

The design of each pair of shoes is developed based on two elephants: functionality and performance (convenience, durability, and so on). You will find your favorite shoelace protection that comes in stock, a foamed tongue to protect your feet and so on.

This may be a topic for a whole separate article, but we will give you examples of different Globe insoles with a brief description.

SHOCKBED insole – for example, used in CT-IV Classic models. A fully polyurethane insole that retains its cushioning properties over the entire life of the shoe.

NITROLITE insole – for example, used in Empire models. The most lightweight insole that has not lost its cushioning properties.

NITROLITE WITH IMPACT – for example, used in Encore-2 models. Insole made of EVA material with good support for the position of the foot.

S-TRAC – for example, used in Encore-2 models. Flexible and tenacious sole. The patented development of Globe.

NIRTOCEL ™ OUTSOLE – for example, used in CT-IV Classic models. Better foot support and shock absorption. A low profile air cushion is integrated into the sole made of polyurethane over the entire heel area.

SUPER V VULCANIZED SOLE – for example, used in Attic models. An example of vulcanized soles from Globe. Maximum durability and feeling of a board – two companions of this sole. Reinforced inserts on the heel and nose of the sneaker provide durability of the sole when riding on a skateboard and more.