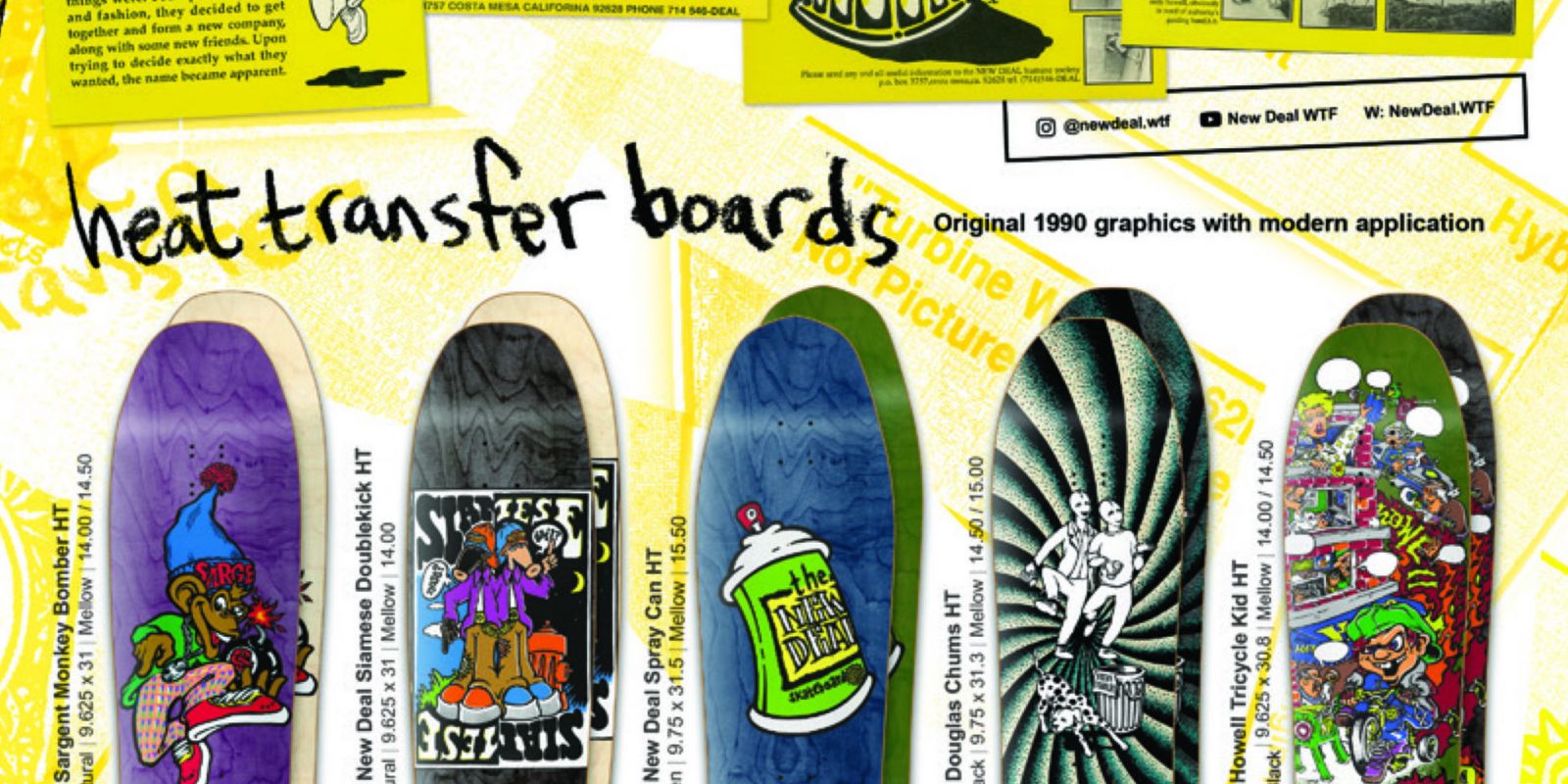 Written by Egor Ivanov on January 31, 2020. Posted in Uncategorized.

History is cyclical. This is manifested in all areas of human activity, and skateboarding in all its diversity is also subject to this. Over the past couple of years, we have all witnessed many unusual comebacks:

But in this whole story there is an event that is unlikely to reach a wide audience. Squat wants to share with you such a landmark event as the revival of New Deal Skateboard Products brand maker Dec.

At the origins of New Deal from 1990, the year the company was founded, there are several actors:

You can know this person by the nickname “Professor Schmitt.” This nickname was earned for Paul’s maximum knowledge of skateboard deck designs. Already 30 companies of Paul (PS Stix, Inc., CreateASkate.org, New Deal Skateboard Products) are considered innovative leaders in the US market.

Paul Schmitt is a scientist in the skateboarding world. Visit www.createaskate.org, which he created to teach junior and middle school children to create skateboard decks. Yes, creating a board is a science, not a blunder. The CreateASkate program helps children learn to understand the intricacies of creating forms and concave decks designed by Paul himself. The program is designed for 5-10 days of study with lessons of 40-80 minutes. Would like the same subject at school? We think so.

But the essence of the program is not that. The program demonstrates the connection of skateboarding with applied sciences, for example, with mathematics. She also develops design abilities in children.

If you watched the bonus to the video from 2008 Elementality vol.1, then you should remember the moment where the children from the Element camp did their skateboards in the workshop of Professor Schmitt.

A professional skater and creative designer, who to this day has a hand in creating creative masterpieces with brands of various sizes.

He was the creator of the first promotional video for the New Deal brand, he was also involved in the selection of the team and successfully planned the delivery of new products to all skate shops.

In the early 90s, it was one of the most successful brands, which was led by skaters. New Deal nurtured Ed Tempelton as a professional skater, founded the large distribution company Giant Distribution and well-known skateboard brands such as Element (formerly Underworld Element). Even media companies like 411VM and On Video were founded under the wing of New Deal.

What to expect from New Deal now?

Now the company has been reprinting its original boards since the first catalog from 1990. The first “drop” will be with the legendary designs and forms of the skateboards themselves from 1990 to 1992. Among the collection you can find the decks of riders such as: Andy Howell, Danny Sargent, Steve Douglas, Andrew Morrison, and Ed Templeton. If these names don’t tell you anything, then watch a 15-minute video with tricks from these skateboarding legends. We are sure that after watching you can say: “Not bad, not bad.”

New Deal’s Impact on the Industry

eboard industry can say that New Deal had a huge impact on the skateboard industry. Also, the experience of New Deal showed skaters around the world that a small group of riders with a manic idea can do business better than any businessmen.

In the 70s and 80s, all production and sales of components for skateboarding (decks, wheels, pendants) were concentrated in the “paws” of 5 large corporations:

But even at that time, brands owned by skaters (such as Alva) were not outlandish. But New Deal set other rules of the game and made all major market players reckon with him.

At the start of the brand in the 90s, Paul, Andy and Steve were “laborers in their company.” Each of them skated, shot, engaged in video editing, created graphics for boards, built presses for the production of decks, and also engaged in sales of manufactured products. The brand gathered around itself the most promising skaters, such as Ed Templeton or Ali Mills, who performed unrealistic tricks for that time.

“New Deal” was the first to develop unique technologies for the production of skateboarding decks, and also “pulled” all the skaters of that time from obscure shorts, dressing them in baggy jeans of their own production.

How to get around famous competitors according to New Deal

At the start of sales, New Deal caught the “oldies” of the market on a maneuver associated with the release and distribution of promotional videos before the collection was launched. This gave a big impetus to the company, and left other major brands behind.

A key feature of New Deal’s skateboard graphics is the combination of mischievous animated shapes with the usual structure of a tree. Most of the decks seem to be as if some kind of freehand drawing in .png format was applied to the prepared skateboard.

At the time of the start of the company, such graphics were authentic and were used carefully, since not every brand could afford such bold design decisions. A successful decision to show the texture of the tree below played a role in the further development of the brand.

What can I say, if the company logo looks like it was as if a teenager scratched it on the school desk with chalk. By the way, this is not so far from the truth. Look at the prototype company logo that Andy Howell drew by hand.

Only the most promising riders who helped to promote the company’s products with unprecedented speed got into New Deal:

The value of New Deal skateboards

It may be a discovery for you, but the skateboarding world also has its own antiques. The very first New Deal skateboards with original graphics today cost a lot of money by the standards of staff for skateboarding. Today, these boards are considered collectible and exhibited on E-Bay at prices ranging from 500 to 1,000 dollars.

Over the 30-year history of the brand, its products have gained high value due to the unique graphics and non-standard forms of the dec.